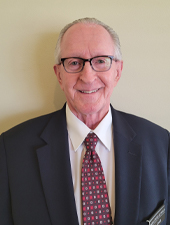 A native of Alabama, B.J. graduated from mortuary school in 1965 and held a funeral service license for 55 years. He served in the U.S. Air force during the Vietnam era, then settled in Texas in 1988 after practicing funeral service in several states. He and his wife, The Reverend Cheryl Homsher, Pastor of Grace Presbyterian, have been married for 26 years and residents of Odessa since 1998. In 2019, B.J. retired from Southwest Transplant Alliance after serving many Permian Basin families who opted for organ and tissue donation. Once he retired, he became a member of the Nalley-Pickle & Welch care team. B.J. enjoys traveling and hopes to see more of the world in the coming years.